Okay so when I was in Hot Topic the other day looking at polish, I saw this eyeshadow palette sitting there and dang it, for once I was just gonna buy something just because it looks pretty and not worry about reviews. Should I have been impulsive or not? Read on! END_OF_DOCUMENT_TOKEN_TO_BE_REPLACED

Afternoon everyone! Just a quick and simple makeup look today. I was up at 4:30 (thanks baby) so I could take a shower and get ready for the day before hubby had to go to work. He doesn’t usually work Sundays but he had to today. Yuk! I’m currently waiting on pins and needles for him to get home.

END_OF_DOCUMENT_TOKEN_TO_BE_REPLACED

Hi everyone! I hope you are having a good afternoon. I realized I hadn’t shown a makeup look in awhile and I had some lipsticks sent to me to try out – Rimmel London Lasting Finish by Kate in 40 and 41 – so let’s kill 2 birds with 1 stone here. 🙂 I’ve also used an older eyeshadow palette by Sephora tailored for green eyes.

Rimmel London Lasting Finish by Kate in 40 is a more yellow-leaning neutral lipstick (on me anyway).  END_OF_DOCUMENT_TOKEN_TO_BE_REPLACED

Hi everyone! So my friend Kate has been helping me find makeup looks to try my hand at and so today’s inspiration comes from soyih on instagram. I’ve used Glamour Doll Eyes shadows in lovesick, Coquette, Mackinac, and ‘Til Death; I’ve also used GDE products Peach is the New Blush, Ms. Monroe, So Fetch.

END_OF_DOCUMENT_TOKEN_TO_BE_REPLACED

Morning everyone! Lately I’ve noticed that reviewing makeup notwithstanding, I’ve fallen into a rut with my makeup looks – I tend to play it safe with neutrals & browns or neutrals & purples. I mean, yeah, play to your strengths but I need to stretch myself a bit. 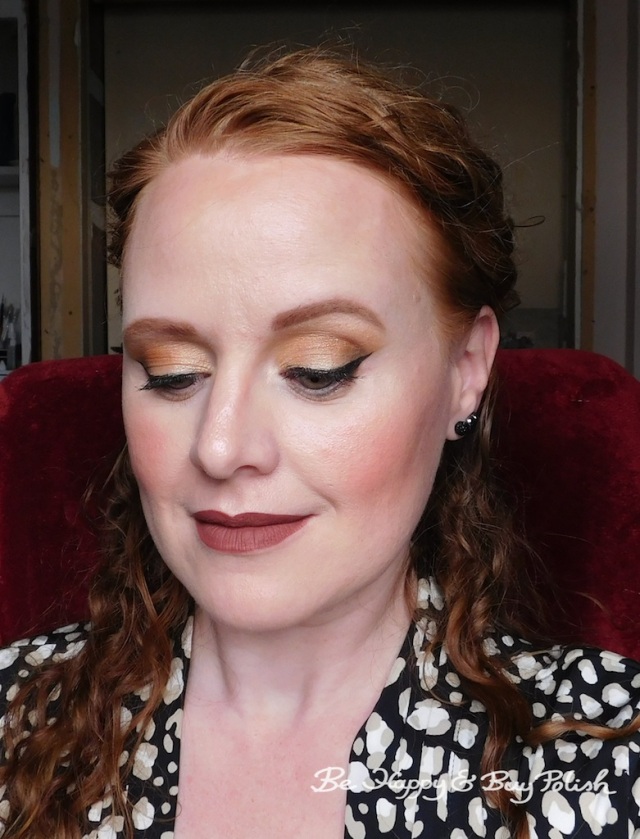 Hi lovely readers! Earlier today I showed you product photos & swatches of the Wet N Wild Queen of My Heart makeup collection. This afternoon, I’ll be showing you the first of three makeup looks I created with these products. Today I’m starting with what I think is my favorite of the three eyeshadow palettes: Will You Marina Me. I’ve also used MegaGlo Cheek & Lip Tint in Flirt On the Street and Crush Upon a Time; and the MegaGlo Highlighting Powder in Lilac to Reality.

END_OF_DOCUMENT_TOKEN_TO_BE_REPLACED

Morning all! I have my third Glamour Doll Eyes insider look of the month to show you with the eyeshadows IT’S SO FLUFFY, Sex Appeal, and Tattooed Remix. Glamour Doll Eyes is an indie makeup company that pretty much rocks. I’ve been a fan for several years.

IT’S SO FLUFFY is a white-pink shimmer eyeshadow with blue sparkles. Described on the site: “sheer pale pink with a golden purple shift and blue sparkle.” Check out a previous insider post for arm swatches.

Sex Appeal is described by the site as “a gorgeous sparkle overlay of teal with a dark purple undertone.” [My bad, I didn’t get a separate pic of this!]

Tattooed Remix is a blurple eyeshadow (more purple than my photo) with green & gold sparkle. Described by the site as “a blue based purple with a pinky copper sheen and gold & green sparkle.” Check out my colored eyebrow post for arm swatches.

I used IT’S SO FLUFFY all over. I built up Tattooed Remix on my lid; applied it, blended it, applied, blended, etc ad nauseum. END_OF_DOCUMENT_TOKEN_TO_BE_REPLACED